Since we replaced the colour sensor with a rangefinder, the behaviour of the slambots has changed – they interact with each other more directly. Another thing that has changed is the shape of the bots. Where before the short end of the breadboard tended to face the front, now because of the position of the rangefinder on the breadboard, the long side of the breadboard faces forward and backward. This seemingly small change has resulted in a significant change in the looks of the new improved rangefinder-based “version 2.0” slambots.

Here are some of the designs that have emerged….

For a long time, the shape that most sumo bots adopted was similar to the one in the above image. You will see that the colour sensor is hanging off the short end of the breadboard. (Notice also the balsa wood backing on the breadboard) 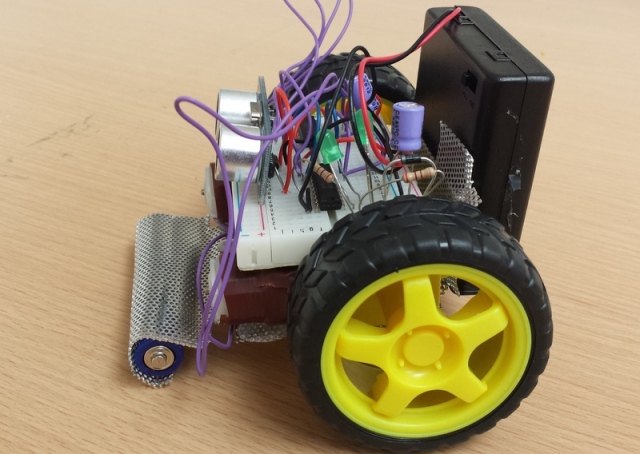 Now have a look at this robot. The first thing you will notice is that the new sensor needs to be positioned along the long side of the breadboard, so the breadboard is in a different position.

In this case, in an attempt to  provide a bit of weight at the front of their robot so that it doesn’t “buck” when the wheels went forward, these participants rolled some aluminium grille around two batteries. This problem of weight distribution can also be handled by placing the wheels right back at the rear of the robot with the battery pack providing weight closer to the front.

This rather elegant design uses two pieces of aluminium grille with one protruding from the front of the robot. The insulating tape provides a smooth surface so that the robot doesn’t get caught on the arena surface when the robot is moving in the absence of a caster or third wheel.

This robot is actually controlled by an Arduino Uno rather than the much much cheaper (but just as good!) MSP430 that we use for the workshop. Nevertheless the basic design is the same. The long nose at the front, in this case supported by some old “strip board” and some gaffer tape, means that the rangefinder sensor works really well. (These sensors are a bit short sighted)