RoboSlam is the work of a team of volunteers who are committed to promoting STEM education (Science, Technology, Engineering, Maths) and encouraging people to make the jump from being users of technology to being creators of technology. The core team (see below) are teachers and researchers in Technological University Dublin (previously known as Dublin Institute of Technology), but the RoboSlam project also relies on a group of volunteer facilitators who generously give their time to make the workshops possible.

I have been a lecturer in the School of Electrical Engineering Systems, TU Dublin since 2000. I currently deliver computing and technology modules to  programmes in Electrical Engineering and Computer Science. My primary research interest is health informatics. I am involved (with Ted) in the highly successful (and addictive!) Annual DIT  “RoboSumo” challenge. This resource and the associated workshop is an attempt to distill some of the fun and magic of our robotics-related activities and bring it to a wider audience.

I’m a lecturer in Electrical Engineering at Technological University Dublin. Among other subjects, I teach Programming, Robotics, Engineering Design and Biomedical Engineering. My primary research interest is signal processing, but I think I actually spend just as much time programming and building robots.

I write about some of my projects on my blog:

I also have blog pages for some of the subjects I teach, including the following: 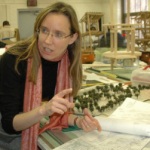 I’m a design professor and educational researcher from the United States. A few years ago, I served as a Fulbright Scholar to TU Dublin (then called DIT) in the area of engineering education, studying the innovative, hands-on approaches Ted, Damon, and their colleagues are using to teach electrical engineering and product design and manufacturing.

I maintain a blog about my Fulbright experiences and other interests at:

Frank is a lecturer in the School of Electrical and Electronic Engineering at DIT. His areas of interest include:

Further information on some of Frank’s projects can be found on his DIT web page:

3 Responses to Who are we?