In this workshop we’ll use the Arduino Nano to build an ultra low-cost heart rate monitor. The signal we’ll actually be measuring is called the photoplethysmogram (PPG). This signal captures small changes in the volume of some part of the body caused by the variation in blood pressure that occurs when the heart beats. These changes are detected by shining light into the skin and measuring how much is reflected back and how much is absorbed. In our device, the light will come from a TCRT5000 infrared reflective sensor. The TCRT5000 contains two electronic components – an infrared LED, which will shine light into the finger, and an infrared phototransistor, which will measure how much is reflected back.

Begin by orienting your breadboard so that it appears as shown below, with row 1 on the left and row 30 on the right. 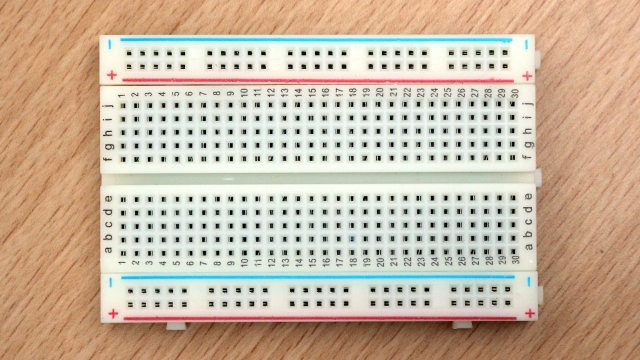 Insert the Arduino Nano as far to the right as possible, as shown below. Pin D12 (of the Arduino) should be in hole D30 (of the breadboard).

Power will be supplied to the circuit from the USB socket of a laptop, via the Arduino. Insert the power connections from the Arduino to the breadboard rails as shown below.

Plug the TCRT5000 reflective infrared sensor into holes E1, E2, F1 and F2, as shown below.

Please ensure that the TCRT5000 is inserted the correct way around. The image below shows the correct orientation of the TCRT5000, viewed from a different angle. Note the letters “TCRT5000” are written on the side of the sensor closest to the end of the breadboard.

Add the power connections and resistors for the TCRT5000 sensor, as shown below.

Insert three 100 kΩ resistors to form a voltage divider that will set the resting voltage of the PPG signal.

Insert the LM358 operational amplifier chip (the 8-pin microchip) and its power connections.

Insert the feedback network for the amplifier. This part of the circuit will control which frequencies are amplified and by how much. 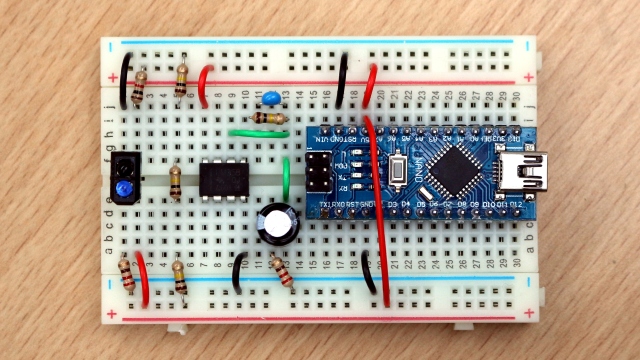 To ensure that the capacitor has been inserted the right way around, check that it appears the same as the one below. Note the white stripe (with minus signs) on the same side of the capacitor as the negative leg.

We’re almost done. We just need to add connections between the different parts of the circuit so that the signal can flow through the circuit from the sensor, through the amplifier, to the Arduino.

Connect the sensor output to the voltage divider and onwards to the operational amplifier. 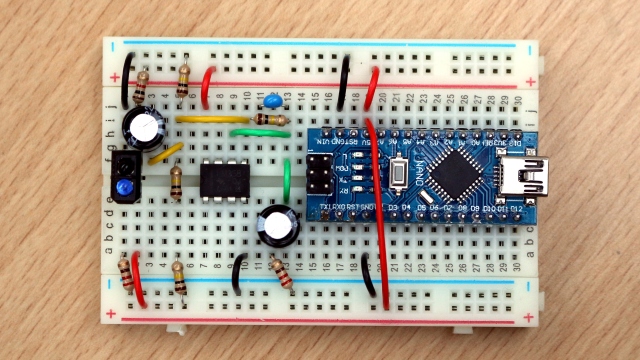 To ensure that the capacitor has been inserted the right way around, check that it appears the same as the one below. Note the white stripe (with minus signs) on the same side of the capacitor as the negative leg.

Finally, we add wires to connect the output of the operational amplifier to the feedback network and the analog input of the Arduino. 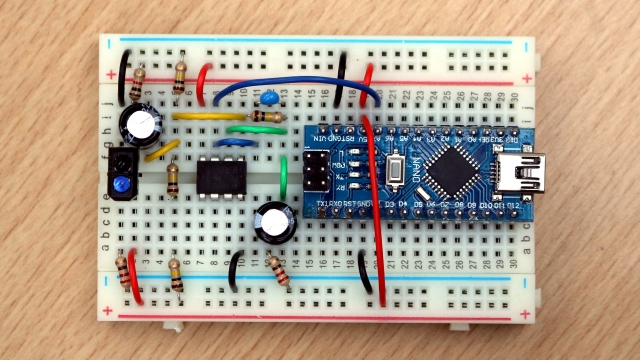 The circuit is now ready to be connected to the laptop so that we can program the Arduino and display the PPG signal.

Connect the Arduino to the laptop using the mini USB cable, as shown below.

Program the code shown below onto the Arduino. It will make the Arduino sample (or measure) the voltage on pin its analog input pin A7 approximately 100 times per second. Each time the voltage is measured by the Arduino, it is converted into a number between 0 (representing 0V) and 1023 (representing 5V), which is then transmitted to the PC via the USB cable.

To display the PPG signal on the PC we will use a programming language called “Processing”, which provides a relatively easy way of receiving the stream of numbers transmitted by the Arduino and drawing graphics on the computer screen to visualise them as a waveform.

To launch the Processing development environment, open the folder “C:\RoboSlam\processing-3.3.3\” and double-click on “processing.exe”.

Paste the following code into Processing and click button with the right arrowhead symbol to run it. Hopefully a graph will appear displaying your waveform. When you place your fingertip on the sensor, it takes a minute for the amplifier to settle before it begins recording the signal, so be patient!