For the last couple of years, DIT has offered a common first year engineering programme for students who prefer to wait until second year to specialise in a particular branch (electrical, electronic, mechanical, etc). This is useful if you’re interested in engineering but want to find out more about each discipline before committing to one. It’s been a fantastic success so far and Damon and I are fortunate to be involved in delivering the part of the programme that takes place here in the Kevin St campus. This year’s class are as friendly as they are talented, so we’re really enjoying working with them. 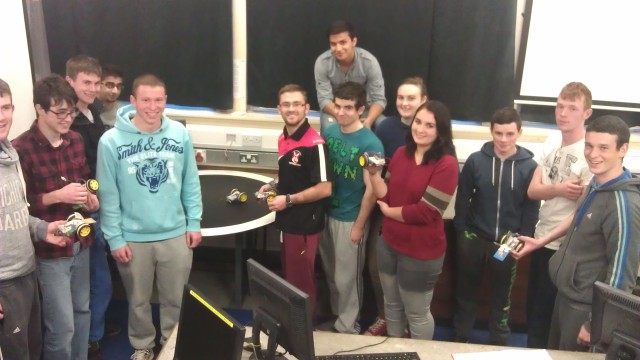 DT097.1 group A showing off their RoboSlam robots.

Damon’s group spent the last couple of classes building RoboSlam robots. They were just putting the finishing touches to them today when I dropped in to take a look. Several students were kind enough to share their photos and videos with me so that I could post them here. Thanks everybody!

Eoin and I spent a few puzzling minutes debugging his colour sensor with a multimeter.

This great photo by Eoin Fitzgerald clearly shows the infrared light shining out of the colour sensor. It’s the glowing pale purple eye on the black device near the top of the picture. This infrared light is not visible at all to the naked eye, but you can see it on a digital camera. Thanks Eoin – it was a great idea to snap a picture of this!

This is Eoin Fitzgerald’s robot on our RoboSumo arena, just as an opponent might see it just before it gets mown off the table! You can just make out Gavin and Francis’s robot whizzing past in the background.

This is Gavin Doyle and Francis Fitzpatrick’s robot, “Slick No. 7”. Very impressive modding, considering the lack of decorative materials available in the lab!

Abdul and Hassnain doing some testing on the RoboSumo arena.

Here Juliana Cummins is using a piece of terminal block to assemble the circuit for the light sensor sub-system.

In this close up view of Juliana Cummins and Claragh Patton Kelly’s robot, you can see the motor driver circuit, which uses one NPN transistor for each motor.

There were videos too. This one is by Claragh Patton Kelly and Juliana Cummins. You can see their robot reliably tracking the edge of the RoboSumo arena using its infrared colour sensor. Whenever the robot detects the white edge of the arena it lights its LED and stops the right motor which causes the robot to turn to the right.

This one shows Abdul Basit’s robot doing the same thing.

The award for the shortest video went to Michael Donohue 😉

This entry was posted in Uncategorized. Bookmark the permalink.